Organisations should commit to releasing their statistics in an open and transparent manner that promotes public confidence.

What you should commit to

*T3.1 The release of both regular and ad hoc official statistics should be pre-announced through a 12-month release calendar, giving a specific release date and time at least four weeks in advance where practicable.

T3.2 Changes to pre-announced release dates or times should be agreed by the Chief Statistician/Head of Profession for Statistics. Any changes should be announced promptly, explaining the reasons for the change.

T3.3 Access to statistics before their public release should be limited to those involved in the production of the statistics and the preparation of the release, and for quality assurance and operational purposes. Accurate records of those who have access before they are finalised should be maintained.

T3.4 The circulation of statistics in their final form ahead of their publication should be restricted to eligible recipients, in line with the rules and principles on pre-release access set out in legislation for the UK and devolved administrations. The details of those granted access should be recorded, together with clear justifications for access. No indication of the statistics should be made public and the statistics should not be given to any other party without prior permission for access. The list of recipients should be reviewed regularly and kept to a minimum.

*T3.6 Statistics should be available to all users at the same time. The standard release time is 9.30am on a weekday. In circumstances when it better serves the public good for statistics to be released at an alternative time, the Director General for Regulation may approve the change. The time of release (whether the standard time or an alternative agreed with the Director General for Regulation) should be announced in advance and adhered to consistently.

T3.7 The name and contact information of the lead statistician or analyst responsible for production should be included in the published statistics.

T3.8 Policy, press or ministerial statements referring to regular or ad hoc official statistics should be issued separately from, and contain a prominent link to, the source statistics. The statements should meet basic professional standards of statistical presentation, including accuracy, clarity and impartiality. The lead statistician or analyst should advise on the appropriate use of the statistics within these statements.

T3.9 Scheduled revisions or unscheduled corrections to the statistics and data should be released as soon as practicable. The changes should be handled transparently in line with a published policy.

*On 5 May 2022, the Office for Statistics Regulation (OSR) revised practices T3.1 and T3.6. These changes follow a consultation on proposals to enable some greater flexibility on the timing of the release of official statistics, while the standard release time remains as 9.30am.

Table of guidance and resources 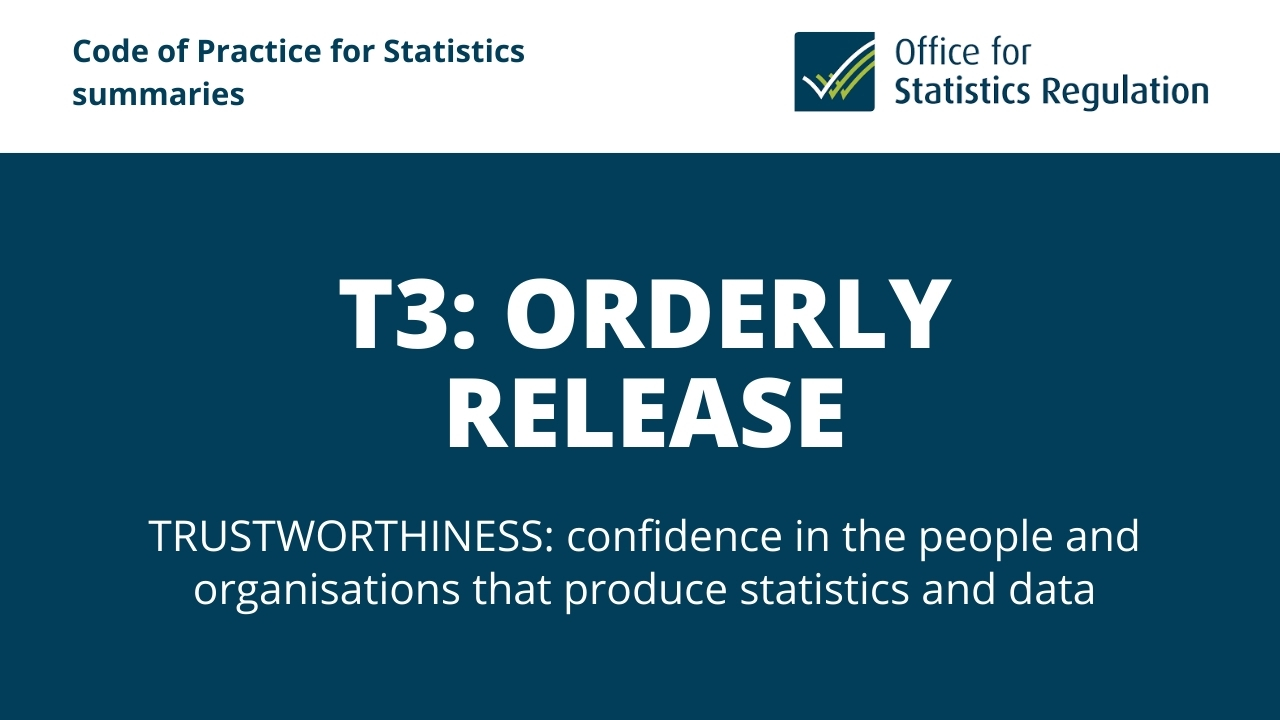 Being transparent and orderly when publishing revisions and corrections